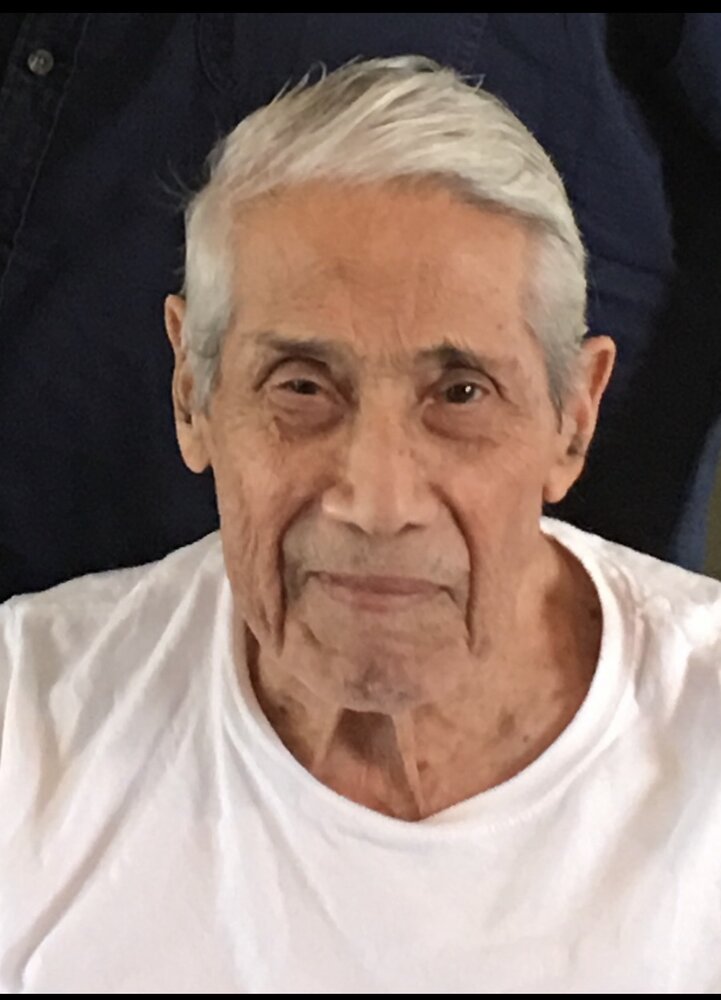 ALONZO TAGLE PHARR – Alonzo Tagle, passed on Thursday December 2, 2021 at the age of 93 years old. Alonzo “Loncho”, as he was known by his family and friends, was a loving and faithful husband to his wife, and a devoted father this his four children; Delsi Ann (Carlos) Avalos; Debra Ann (Alan) Springer, Alonzo Jr. (Leticia) Tagle, and Alma (Ruben) Gonzalez. He was a dedicated grandfather to 12 grandchildren, 23 great-grandchildren, and 2 great great-grandchildren. His children and grandchildren survive him. Alonzo was born November 29, 1928, to Alberto and Blasita Ramirez-Tagle in Pharr, Texas where he resided until his death. He was proceeded in death by his loving wife Elida Hernandez-Tagle, and his brothers Gilbert R Tagle, and Raul Tagle. Besides the immediate family he is survived by a sister Teresa (Romeo) Sloss. Alonzo graduated from high school from Pharr-San Juan-Alamo, and on June 30, 1948, he enlisted at the age of 19 into the United States Marine Corp. Alonzo served our country proudly for a total of 5 years. He served in the Korean conflict. Alonzo was stationed on the USS Astoria. During his service, he received several distinguished medals and was a “Rifle Sharpshooter”, “Pistol Sharpshooter” a “Military Occupational Specialist: Infantryman”. He supervised the routine functioning and tactical employment of a rifle fire team or squad. He enforced march discipline and conducted training in infantry subjects. After his years of service to his country he was Honorably Discharged from the U.S. Naval Station in Treasure Island, San Francisco California on July 5, 1953. He left the U.S. Marine with $324.06 in his pocket. Upon returning to Pharr, Texas he was hired to work at the Pharr Police Station as a Police Officer. The jail was located on Clark Street across the street from where our mother used to live. There he met his future wife, Elida Hernandez. He and Elida married in September 1954. In 1953, Alonzo began his employment with the United States Postal Service. His route had him walking over 20 miles per day 6 days a week through rain, Texas heat, high humidity, frigid cold weather, and several dog bites. He would come home during lunch drenched in sweat many days, he would shower change clothes, and head out again. He rarely complained about his job. His work ethic was instilled in all his children. When he retired in the late 1980s, he had 2,500 hours of sick leave accumulated, which he was recognized for. His personal contact with the residence of Pharr, allowed him the opportunity to be well known by many in Pharr. He got to know the people and streets so well, he could tell you the address of friend from the top of his head. During his days off or vacation he was an avid hunter and fisherman. He would hunt deer, get it processed and hand it to his wife to make tamales for the holidays. He would also put his fishing gear in the car with a cooler of drinks and would drive to South Padre Island pier to fish and see if he could catch anything. In his personal life, Alonzo was not someone that would attend church every Sunday, but he truly believed in GOD, and his faith was strong. In his younger years, he could quote the bible from cover to cover. He always would watch the late Billy Graham Ministries and John Hagee Ministries. His favorite prayer was the Lord’s Prayer. Alonzo was a very private and quiet man, he predominately kept to himself. He was a man of few words. He always treated everyone he met with great respect. Although he was not a man to speak many words to get his message or feelings across, his life and character were testimonials to the great man he was. Visitation will be held on Sunday, December 12, 2021 from 5 p.m. to 9 p.m. with a 7 p.m. prayer service at Legacy Chapels located at 4610 South Jackson Road in Edinburg, Texas. A grave side service will follow at Palm Valley Memorial Gardens in Pharr Texas on Monday, December 13, 2021 at 1:00 p.m. Services are under the direction of Legacy Chapels in Edinburg Texas.
To send flowers to the family in memory of Alonzo Tagle, please visit our flower store.