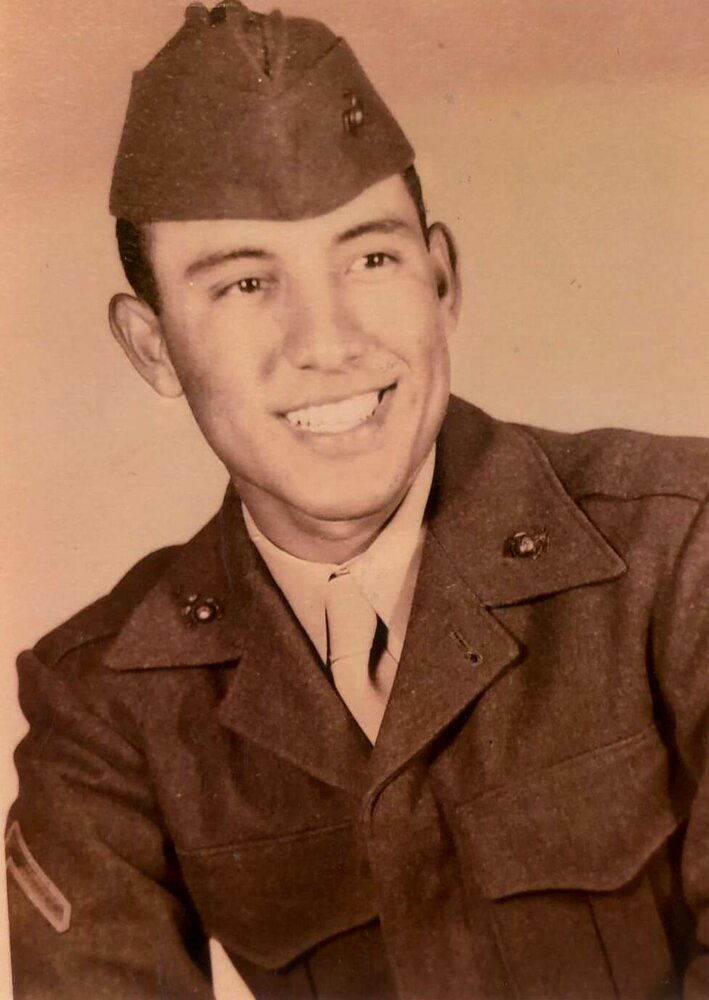 ARMANDO P. MARTINEZ EDINBURG - Armando P. Martinez was born on April 25, 1932, in Carrizo Springs, Texas, and passed away peacefully on Tuesday, August 9, 2022, in Edinburg, Texas. He was a member of the Texas State Bar for fifty-five years. Mr. Martinez is preceded in death by his parents, Valente Robles Martinez and Andrea Pando Portillo Martinez; and his brother, Ramiro Martinez. Mr. Martinez is survived by his wife of nearly sixty-eight years, Pauline Garcia Martinez; his brother, Mario; his sister, Una Markel; his 5 children, Luis Armando, Ralph Ramiro, Sylvia Ann, Michael Gerard, and Robert John; daughters-in-law, Laura Huitema Martinez and Laura Samano Martinez; his grandchildren, Brad, Kathryn, Megan, Malee, and Mavrick Martinez; his great grandchild, Alessia; numerous family and friends. Armando P. Martinez was a Korean War combat veteran and a dedicated United States Marine, until his death. After serving his country, Mr. Martinez became a successful businessman. Mr. Martinez was the owner of a Phillips 66 gas station and then a successful auto parts business in Houston’s Second Ward before becoming an attorney. Armando P. Martinez attended the University of Houston and graduated with a Doctor of Jurisprudence from South Texas College of Law in 1967. Throughout his adult life Armando was involved in community affairs through his charitable work as a member of the Lions Club where he dedicated countless hours and financial contributions to assist heart patients from the United States, Mexico and Latin America. Armando P. Martinez’s life passion was his fight to end discrimination against Mexican-Americans. To that end, Mr. Martinez represented the League of United Latin American Citizens (L.U.L.A.C.) as a member and counsel in numerous successful and significant civil rights lawsuits. Foremost, however, was Armando P. Martinez’s role as an attorney. Armando P. Martinez was a member of the bar for over fifty-five years. Armando P. Martinez practiced in Harris County, Texas and surrounding counties, handling both federal and state criminal cases. Mr. Martinez, also represented clients throughout Texas and in federal jurisdictions throughout the United States. Armando P. Martinez tried well over three hundred cases and earned the respect and admiration of clients, judges, and other lawyers. In addition, Armando P. Martinez practiced for nearly twenty-five years in federal and state courts in South Texas, primarily in Hidalgo County. Again, Mr. Martinez attained the admiration and respect of clients, judges, and lawyers in that legal community. Armando P. Martinez reflecting his U.S. Marine pedigree, believed in protecting the interests of his clients without regard to monetary reward, respectful of the legal profession, and act with honor and professionalism. Mr. Martinez always believed that professionalism, patriotism, respect for his fellow man, and principles of justice, equality, and charity should motivate an attorney not monetary gain. Armando P. Martinez is gone and resides with the LORD. However, his legacy lives on. His sons, Luis, Ralph and Michael are attorneys and members of the State Bar of Texas. Laura Samano Martinez, his daughter-in-law is also an attorney and member of the Texas Bar. Ms. Martinez credits Armando P. Martinez as her mentor and inspiration for her decision to become an attorney after marrying Ralph R. Martinez, Armando’s son. Armando P. Martinez’s granddaughter Megan Mikayla, Michael Martinez’s daughter is a member of the Texas Bar, and is married to attorney Kade Rhodes, whom she met in law school. All five of Armando P. Martinez's grandchildren are college educated. In addition, many unrelated individuals who became attorneys credit Mr. Martinez as their role model. Semper Fidelis. “…He will wipe every tear from their eyes. There will be no more death or mourning or crying or pain, for the old order of things has passed away.” Revelation 21:4 Visitation will be from 5 p.m. to 9 p.m. with a 7 p.m. Celebration of Life service on Saturday, August 20, 2022, at Legacy Chapels 4610 South Jackson Road in Edinburg. Funeral services are under the direction of Legacy Chapels.
To send flowers to the family in memory of Armando P. Martinez, please visit our flower store.