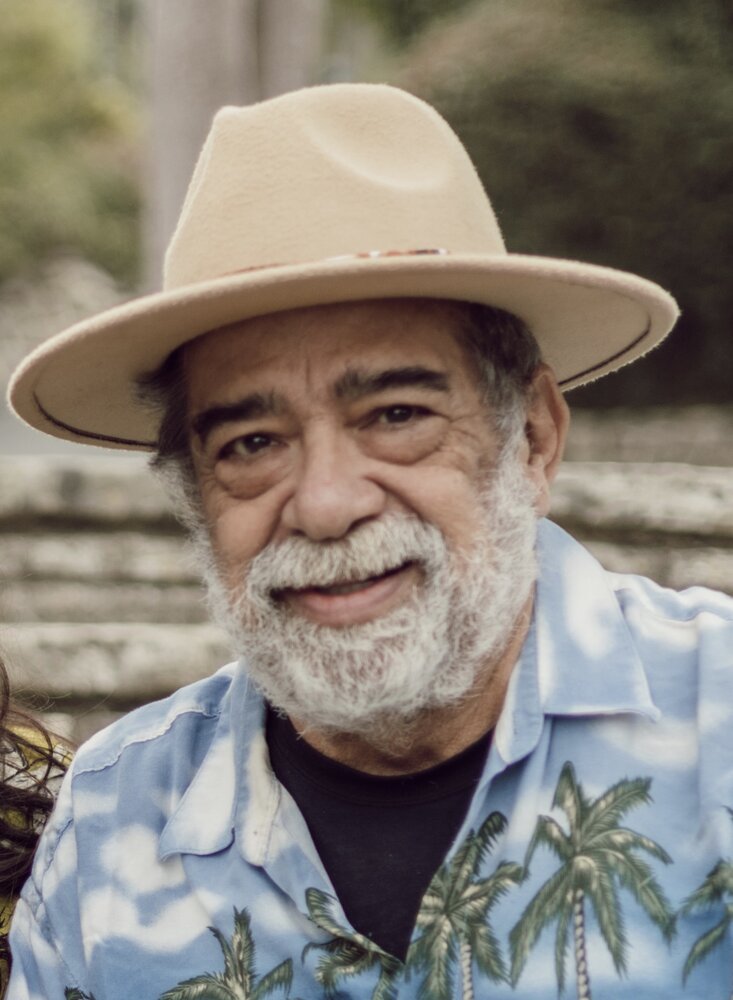 CESAR JAVIER MALDONANDO EDINBURG - Cesar Javier Maldonado, age 73, peacefully entered eternal rest on Friday, May 27th, 2022 in McAllen, Texas of metastatic lung cancer. He was surrounded by his three loving children. Cesar, the ultimate free spirit, was born to Gregorio and Margarita Maldonado on October 7, 1948 in Monterrey, Mexico. He was the third of four siblings, and also a younger half sister. He studied Business Administration at El Tecnologico de Monterrey. Upon graduation, Cesar embraced his love of the arts and explored his innate talents in photography and music. These passions, along with his fiery ambition and carefree attitude, took Cesar to California in 1971. He spent 3 years living in Los Gatos, Santa Monica, Santa Barbara, and San Diego. He was a true artist, always carrying a satchel full of musical instruments and a camera draped around his neck. As a skilled photographer, Cesar saw and captured life’s beauty through a lens. He expressed his emotions through music and made connections and friendships with a variety of well-known musical talents. One included a jam session with Carlos Santana and his band, whom he met in Santa Barbara at the age of 24. Cesar was a talented percussionist and specifically favored the bongos and congas. In his mid-twenties, Cesar visited his older sister in San Salvador, El Salvador. While there, he met Lupita Rubio at a party (of course), whom he later married in 1975. After some time in Guatemala and Monterrey, they settled in McAllen, Texas in 1980 where he worked in logistics for a company that distributed large irrigation systems to farmers in South Texas and Northern Mexico. They later had 3 children and 2 dogs and lived in a custom-built home in Plazas del Lago in Edinburg, Texas. The family enjoyed traveling to El Salvador, South Padre Island, Disney World, and Mexico. Cesar enjoyed performing Latin jazz, salsa, rock and roll with various local bands. He also contributed to the local newspaper, The Monitor, and covered many musical artists who came to the Rio Grande Valley such as Tito Puente, Celia Cruz, Raúl Di Blasio, and even Carlos Santana 20 years after they first met. In 2001, Cesar and Lupita went their separate ways and remained friendly. His life after this time period had its ups and downs, but nonetheless, Cesar's heart remained strong and full. He prioritized spending time with family and friends, listening to music, watching fútbol, eating good food, riding his moped, and watching his favorite TV shows, such as the Discovery Channel, and movies, especially suspense and horror. Touching the hearts of many, Cesar's charm was undoubtedly magnetic. He made an impression everywhere he went. Those who loved him will always remember his humor, child-like spirit, talents, and his larger-than-life personality. He was truly one-of-a-kind. Cesar is survived by his children: Tanya Maldonado Toomey (son-in-law Michael Patrick Toomey) of Redondo Beach, California; Sofia Guadalupe Maldonado of Redondo Beach, California; and Diego Andres Maldonado of McAllen, Texas; grandson, Sebastian Patrick Toomey; eldest sister Sylvia Maldonado of San Salvador, El Salvador; half sister, Ana Selma Maldonado of Monterrey, Mexico; former wife and friend, Elyda Guadalupe Maldonado, and numerous cousins, nieces, nephews, and friends that are family. He is preceded in death by his father, Gregorio Maldonado of Monterrey, Mexico; mother, Margarita Leal de Maldonado of China, Mexico; brother, Enrique Maldonado of Mexico City, Mexico; sister, Elsa Maldonado de Hernandez of Tijuana, Mexico; and nephews, Javier Maldonado and Oscar Maldonado of Mexico City, Mexico. A Celebration of Life will be held at Legacy Chapels at 4610 S Jackson Rd, Edinburg, TX 78539 on Wednesday, June 8, 2022 at 5:00pm. Flowers are beautiful and appreciated, though not necessary as your love and support are more than enough. You may consider a donation in Cesar’s memory to the victims’ families of the horrific, senseless, and cruel mass shooting at Robb Elementary School in Uvalde, Texas. This happened just a few days before Cesar’s passing. Here is a verified fundraiser by VictimsFirst: a network of families of the deceased and survivors from over two decades of previous mass shootings. https://gofund.me/bda1a77d Source: https://www.nytimes.com/2022/05/25/us/uvalde-how-to-help.html Special thanks to Amara Hospice and Grand Terrace Rehabilitation and Healthcare in the final weeks of Cesar’s life, and to friends and family who have supported in so many loving and meaningful ways.
To send flowers to the family in memory of Cesar Javier Maldonado, please visit our flower store.