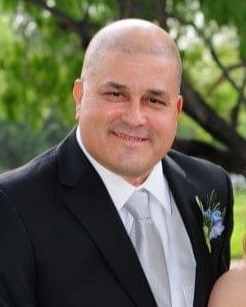 Chubby had a big heart that was all about his family. He and Debbie met shortly after high school, and if you’ve ever heard that opposites attract, that was them! From short to tall, quiet to loud, black olive &amp; mushroom to meat lovers (pizza), the list goes on and on. They completed each other and needed one another from day one. Chubby’s kids learned so much from him.
They each have their own distinct traits which they got from him and some form of that loud and happy laugh. Chubby worked hard for 40+ years to be the best he could in the HVAC industry. He started his own business, taught, and mentored many, including Nikki this past year. He was the guy to call no matter the problem, he knew how to fix it and usually make it
even better than it was before. His family and friends have loads of stories. His humor was brash, yet loving. He was admired for it and drew in friends and kept them close. Chubby’s booming laughter announced his presence, and that joy it brought to us all will be cherished forever.

Visitation will be from 5 p.m. to 9 p.m. with a 7 p.m. rosary, Wednesday, November 2, 2022 at Legacy Chapels 4610 South Jackson Road in Edinburg. Funeral mass will be at 9:30 a.m. on Thursday, November 3, 2022 at Sacred Heart Catholic Church in McAllen. Interment will follow at Valley Memorial Gardens in McAllen.

To send flowers to the family in memory of Joel "Chubby" Garcia, please visit our flower store.