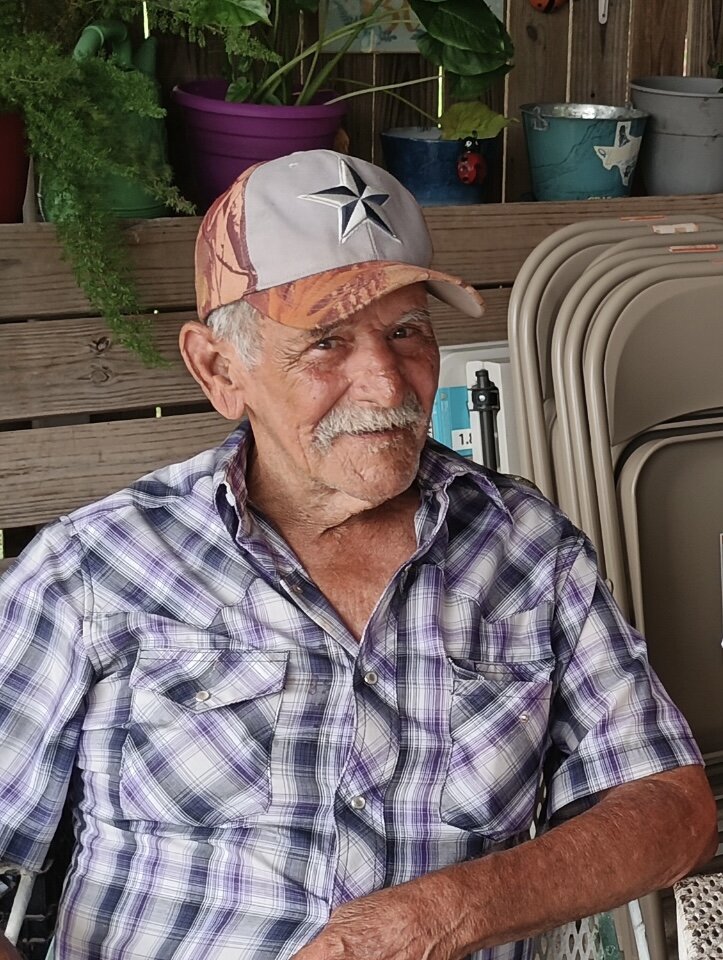 ROBERTO MEZA WESLACO- Mr. Roberto Meza, 83, entered into eternal rest on Thursday, February 17, 2022, in Weslaco surrounded by his family. Mr. Meza was preceded in death by his parents Jesus and Romana Meza; his sisters, Aurelia Guajardo, Tomasa Moreno, Cristina Rodriguez and Nasaria De La Cruz; ; his brothers, Juan Meza and Rodolfo Meza. Born and raised in Lyford, Texas as a young boy, Roberto loved the outdoors and enjoyed raising animals and his pet dogs, birds, rabbits and even raised a pet raccoon. He and his siblings were first generation Americans born in Texas that settled in Willacy County. He had a true country boy spirit living in rural ranch land at a young age. His family eventually moved to Alamo, Texas in the mid 1940’s and he attended Alamo elementary school till the 6th grade and began to work at young age as a field laborer. As a young man he traveled to work with his parents to Edna and Ganado, Texas picking cotton in the 1950’s. He traveled to Florida to pick fruit and vegetables in the fields of Immokalee, Homestead, and in Ruskin. They would always return home to the Valley. After marrying in 1958 at St Joseph Catholic Church in Alamo, Texas he set out for Nampa, Idaho but again would return to Alamo where he and his wife lost their first daughter. His father would travel to Illinois. He followed and soon after settled in Illinois to raise his family for 12 years in the 1960’s alongside his wife. While in Illinois, he worked in a farm in Paxton caring for dairy cows and pigs and then settled in Hoopeston and worked in a junk yard enduring the harsh winters of Illinois. He was a great gardener and would grow vegetables with his kids in the summer and would preserve them for the winter. He would eventually return home to Alamo, Texas with his family. He continued to travel as migrant farmworker with his wife and children to Plainview, Texas working in the cotton fields and cotton gin and then again to Immokalee, Florida in the late 1970’s to work the fields alongside relatives that had settled in Immokalee in the 1950’s. A truly remarkable and hard-working man that would continue to work in the fields all over the Valley picking fruit and onions. He eventually made his way to Greely, Colorado picking cucumbers and thinning sugar beets fields till the late 1980’s. He continued to work in the fields till his early 60’s. He lived a hard life as a laborer and always tried to make a better life for his children. He truly was a man that traveled many places. After retiring, he continued to enjoy fishing with his friends and his love for raising pet animals. One thing that he would always make time for was fishing. He never lost his love for raising pet animals. It never left him even as he entered his retirement. He enjoyed growing flowers and potting plants as well. He would always help anyone in need. He touched many lives along the way in his journey and his life was blessed with the people he loved and cared for. He spent a lifetime building memories that all his family will always cherish and remember. He enjoyed his grandchildren and his great grandchildren as well those other children that were around him not his own. He appreciated the company of all his nieces and nephews. He had a great sense of humor and was easy to strike a conversation with. He will always be remembered as one truly enjoying being outdoors and one that never complained with his pains. He was a loving son, brother, father, uncle, companion, grandfather, and great-grandfather. He was most certainly rich. Not in material things but rich in family and his life experiences that he offered to all those that knew him and he touched. He would give of himself always and would offer anything that he could to help. He will truly be missed and he will continue to live in those he left behind. Gone but never forgotten. Mr. Meza is survived by his partner, Norberta Montoya; his children, Nora Garcia, Gilberto (Norma) Meza, Nelda Ibarra, and Roberto (Maria) Meza Jr.; nine grandchildren, Angelita Garcia, Rene Jaime Ibarra, Gracie Garcia, Gilberto Meza Jr, Erica Lee Ibarra, Anna Lee Meza, Cynthia Garcia, Jesus Roberto Meza, and Patrick Allen Ibarra; sixteen great-grandchildren, Anissa Irene Garcia, Ezmiee Lesette Garcia, Leasia Brianna Lee, Isabella Sofia Ibarra, Calvin Lamar Sanders, Thalia Ibarra, Mia Ibarra, Kaylee Ibarra, Jamie Regina Ibarra, Alison Ibarra, Emma Sofia Sandoval, Rene Jaime Ibarra III, Ariel Ibarra, Olivia Celeste Meza, Elena Rose Sandoval, and Nathan Patrick Ibarra; three siblings - Candelario (Audelia) Palomo, Enrique Meza, and Juanita Gorena; numerous nieces and nephews; former spouse Delfina Meza. Visitation will be from 5 p.m. to 9 p.m. with a 7 p.m. rosary, Sunday, February 20, 2022 at Legacy Chapels 4610 South Jackson Road in Edinburg. Funeral service will be at 10 a.m. Monday, February 21, 2022 at Legacy Chapels in Edinburg. Interment will follow at Val Verde Memorial Gardens in Donna. Special thanks to Margarito and Beli Montoya for helping in his time of most need and to all others in the Montoya family. Funeral services are under the direction of Legacy Chapels in Edinburg.
To send flowers to the family in memory of Roberto Meza, please visit our flower store.